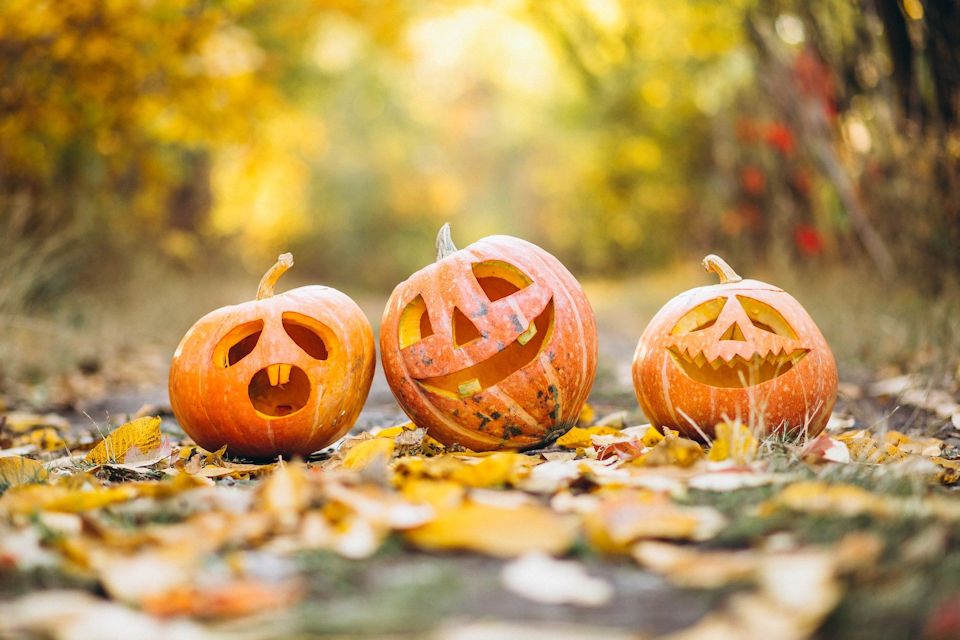 ~ image by Mayur Gadge from Pixabay

Halloween is a Christian name (All Hallows’ Eve) for a non-Christian holiday in the U.S. However, Halloween is “more than just a good scare,” says Pastor Mike Poteet.

I was a third-grade devil!

The Halloween I was nine years old, I went trick-or-treating as the devil. I had no satanic interest; I simply thought it would be fun to wander around wearing inflatable horns on my head and brandishing a plastic pitchfork. Wearing red polyester pajamas and cowboy boots to complete my costume, I wasn’t even as frightening as Casper the Friendly Ghost.

But I remember how some friends reacted. “Aren’t you a Christian? Isn’t your dad a minister?” (Yes, and he was happily snapping Polaroids.) “I’m surprised you’re trick-or-treating at all.”

I realized then that not everyone agrees about how or even whether Christians should celebrate Halloween. That question has interested me ever since, especially as the holiday’s popularity has increased exponentially.

According to the National Retail Federation, over 171 million Americans (69.1 percent of the population) will celebrate Halloween this year. Their total spending — on costumes, decorations, candy, greeting cards and more — will reach $8.4 billion, the highest level the annual survey has recorded, an average of $82.93 per person.

What makes Halloween so popular, and why do Christians disagree about whether they should join in?

Although Halloween as we know it emerged from several sources, its name has a Christian etymology. In Calendar: Christ’s Time for the Church, Laurence Hull Stookey explains that the early church ran out of days on which to commemorate its martyrs and saints. To solve this “crisis,” one date became “a kind of omnibus occasion” commemorating them all. Believers in different places kept this festival on various dates until, in 837, Pope Gregory IV fixed November 1 as All Saints’ Day. In medieval England, it was called Alholowmesse, “All Hallows’ Mass.” The night before was “All Hallows’ Eve,” ultimately shortened by the 18th century to “Halloween.”

Today, some Christians promote Halloween festivities focusing on our communion with the saints, that “great cloud of witnesses” to Christ (Hebrews 12:1) now living with him. One creative Catholic blogger, for example, showcases on her site kids’ costumes that do double duty as depictions of saints and trick-or-treating outfits. One child who dressed on November 1 as Saint Denis, the decapitated third-century French bishop, had gone out the night before as “Guy Carrying His Own Head.”

Despite its name, modern Halloween has no real connection to Christianity in American culture. In fact, it holds no single, definitive meaning. Halloween, like beauty, is largely in the eye of the beholder. “If it is a fixture in our annual calendar,” writes historian Nicholas Rogers, “it is also a holiday that has been reinvented” many times and is changing still: “That is part of the secret of its resilience and vibrancy.”

One of Halloween’s biggest changes in recent years is its emergence as a holiday for grown-ups. “Like treats snatched from a trick-or-treat bag,” USA Today reporter Bruce Horovitz claims, “adults have slowly been stealing Halloween from kids for years.”

One major trend Horovitz points to as evidence for his claim is the big business of Halloween costumes for adults. The number of costumes for grown-ups purchased at Halloweenexpress.com rose from less than 30 percent to more than 60 percent between 2002 and 2012. Some costumes are bigger versions of what the kids wear. This year, for instance, superhero costumes are tops among both kids and adults. Others are adult in a more risqué sense. Various risqué occupational costumes (police officer, nurse, teacher), almost exclusively intended for women, fill store racks and websites.

Is what Horovitz calls “the adultification of Halloween” cause for concern? Halloween can provide grown-ups welcome and low-stress chances to socialize. “You don’t have to travel or deal with relatives,” marketer Denise Delahorne told Forbes magazine. “There’s not the holiday pressure to find a date if you are single.” And Halloween’s make-believe aspect can be fun, even therapeutic. Kelly David, spokesperson for the Spirit Halloween chain of seasonal stores, told one business journal that Halloween dress-up “is an escape from reality for a day. For adults, you can put on a Halloween costume and forget about work, the bad economy, and other pressures.”

But can Halloween lead us to indulge our imaginations too much? Christians might consider the apostle Paul’s admonitions to “capture every thought to make it obedient to Christ” (2 Corinthians 10:5), focusing our minds on what is true, holy, just, pure, lovely and praiseworthy (Philippians 4:8). What kind of Halloween costumes meet those criteria? What kind of Halloween celebrations might help adults nurture a childlike sense of imagination and play without encouraging childish behavior?

One aspect of Halloween that’s never changed is its preoccupation with mortality. As Halloween historian David Skal writes, “The grand marshal of the Halloween parade is, and always has been, Death.”

Plastic skulls and skeletons adorn house windows and porches. Trick-or-treaters make their rounds costumed as vampires (the “living dead”) and zombies (the “walking dead,” a phrase made more familiar by the comic book and TV series of that name). Horror movies like Halloween (1978) and its sequels link murderous mayhem to October 31. Although it’s emphasized more in some eras and customs than in others, Halloween retains an unbreakable connection to what The Walking Dead creator Robert Kirkman calls “the unrelenting, unstoppable possibility of death that looms over all of our lives at all times.”

In Latin America, especially in Mexico, and in Hispanic communities elsewhere, the holiday most like Halloween is Día de los Muertos, the Day of the Dead, which is frequently celebrated over several days. It faces death even more frankly. Celebrants light candles at and decorate loved ones’ graves; dance in parades with faces brightly painted to look like skulls (calaveras); and eat sugar skulls (calaveras de azúcar), candy coffins and sweet “bread of the dead” (pan de muertos) at parties. Helen Tafoya-Barraza, a clinical counselor for University of New Mexico Hospitals, writes on her website that Día de los Muertos teaches people, especially children, not to be afraid of death and “to enjoy and appreciate every moment.” She says the Day of the Dead is “a true celebration of life.”

More than a good scare

Halloween’s images of death are, for many, simply entertaining frights. Talking to the BBC about Universal Studios’ annual theme park of haunted mazes and “scare zones,” Mike Aiello, Universal’s director of entertainment, said, “A lot of people really enjoy it. I’ve always perceived someone being scared or wanting that adrenalin rush as the same as someone who wants to laugh … They’re two ends of a really dramatic, emotional spectrum — the laugh and the scare — [and] there’s a rush either way. And for those few moments when you’re experiencing that you’re not thinking about anything else.”

Nothing would keep Christians, however, from seeing more in Halloween’s depictions of death and evil— vampires, witches, ghosts, even devils. Might they serve as indirect reminders that while “the cosmic powers of this present darkness” (Ephesians 6:12, NRSV) are real and we all will one day return to dust (Genesis 3:19), we have nothing to fear from sin, evil and death because God, in raising Jesus Christ from the grave, has triumphed over them all?

Scripture says Jesus “disarmed” the powers of darkness and “exposed them to public disgrace by leading them in a triumphal parade” (Colossians 2:15). How humiliated was the devil, I wonder, by my nine-year-old self, clomping from door to door in blowup horns and too-big boots, asking for candy?

Christians may never agree on whether they can or should celebrate Halloween. But we can agree with a stanza from “A Mighty Fortress Is Our God,”  the famous hymn by Martin Luther, who sparked the Protestant Reformation when he posted his 95 Theses on, coincidentally, October 31, 1517: “The Prince of Darkness grim, we tremble not for him; / his rage we can endure, for lo, his doom is sure; / one little word”—Jesus Christ, the Word of God—“shall fell him.”

~ Mike Poteet, a writer of teaching articles, is a Presbyterian minister (PCUSA), currently serving the larger church as a curriculum writer. This article appeared in MinistryMatters.org, a community of online resources. It was written for FaithLink, a weekly discussion curriculum from United Methodist Publishing House that connects faith to the current issues and events making headlines every day. Faithlink is available by download or through a weekly email subscription.