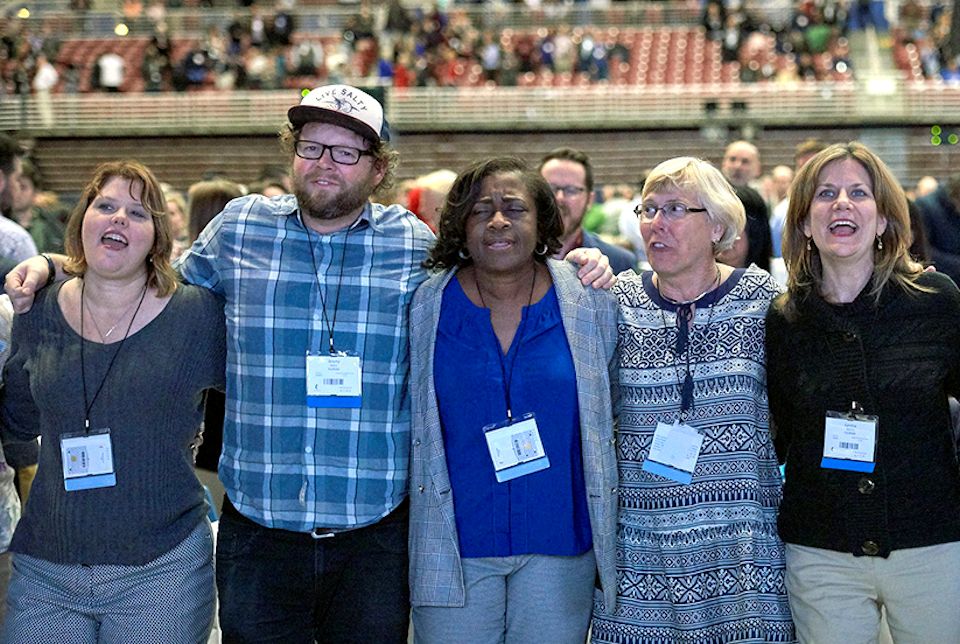 “Many United Methodists see no reason to throw in the towel on the church they love,” says UM News reporter, Heather Hahn. Five Michigan GC delegates are among signers of an Open Letter to the Connection.

Since the postponement of General Conference to 2024, much of the news has been about church disaffiliations and denominational divisions.

No question the rhetorical punches are flying on social media and in newsletters. However, many United Methodists see no reason to throw in the towel on the church they love.

More than 275 General Conference delegates and other church leaders released an open letter March 18 that shares their hopes for the denomination’s future and their commitment to stay United Methodist.

“Ministry is happening now!” said the Letter to the Connection upon the Postponement of General Conference.“With each of you, we will do the work of Christ that will lead our church into Easter resurrection.”

Most of the signers come from across the United States. Other United Methodists are invited to sign.

The Rev. Eric Swanson, a delegate from the Illinois Great Rivers Conference, said he and the letter’s other writers wanted to present a positive vision while acknowledging there is still work to do.

““So embodying the key points of this letter is most important right now.” ~ Derrick Scott III, Florida Conference

In the letter, the signers commit to healing the wounds caused by division.

The letter also says signers will:

The letter signers also join with the United Methodist bishops’ “Narrative for the Continuing United Methodist Church” in committing to be “… one people, rooted in Scripture, centered in Christ, serving in love and united in the essentials.”

The letter points out that it arrives during Lent, a somber season of repentance and remembering Christ’s sacrifice on the cross. The letter also comes at a time of anxiety for many United Methodists.

“We can continue to build relationships. We can repair trust. We can claim and ground ourselves in identity. … We have to start thinking now about who we are becoming.” ~ Rev. Kennetha Bigham-Tsai, Michigan Conference

After decades of intensifying debate over LGBTQ inclusion, many expected the coming General Conference to adopt a formal plan for the denomination to separate along theological lines. The most endorsed proposal would have allowed congregations and annual conferences that support the denomination’s current bans on same-sex weddings and noncelibate gay clergy to leave with property and $25 million in United Methodist funds to start a new denomination.

Now that legislation is in doubt. Earlier this month, General Conference organizers announced that because of long visa waits, the lawmaking assembly — already postponed twice by the pandemic — would not be able to convene this August as scheduled. Instead, organizers are planning for the assembly, which draws delegates from four continents, to meet in 2024.

With the postponement, organizers of the new theologically conservative denomination — the Global Methodist Church — have moved up the launch date to May 1, 2022. The United Methodist Council of Bishops has made plans for how it hopes to handle congregational disaffiliations. The bishops also have asked the Judicial Council, the denomination’s top court, whether annual conferences — church regional bodies — can leave the denomination under current United Methodist law.

Many of those planning the Global Methodist Church have responded to General Conference’s third delay with anger at United Methodist leaders and frustration with the uncertainty.

The March 18 letter strikes a different tone, speaking of excitement for the continuing United Methodist Church.

Derrick Scott III, a delegate and campus minister in the Florida Conference, said the United Methodist witness to the world matters more as some begin their departure from the denomination.

“So embodying the key points of this letter is most important right now,” he said.

Fred Brewington, one of the letter writers and a delegate from the New York Conference, said his prayer is that United Methodists not try to get back to business as usual.

“Instead, we should take this opportunity to see the new thing that God is doing and that through our collective and shared vision, we live into a bright and exciting time of mission and ministry,” he said.

“The focus on faith, inclusivity, and what God’s mosaic can do to reshape a very broken world is the aim.”

The Rev. Kennetha Bigham-Tsai, a delegate from the Michigan Conference, said she hopes the letter will help people think about what they can do without legislation. She is the chief connectional ministries officer for the Connectional Table, a leadership body that backs legislation to create new regional structures in the denomination. But even as that legislation awaits consideration, she said United Methodists have work to do.

“We can continue to build relationships. We can repair trust. We can claim and ground ourselves in identity,” she said. “We can begin to imagine the future of our church. Such visioning work is crucial. If we can’t imagine it, we can’t achieve it. We have to start thinking now about who we are becoming.”

“If anything, the pandemic has helped me see the resilience and flexibility of God’s people.” ~ Rev. Dalton Rushing, North Georgia Conference

The Rev. Dalton Rushing, a delegate from the North Georgia Conference, said it was a no-brainer to join in signing the letter.

“I hope fellow United Methodists will take heart. If anything, the pandemic has helped me see the resilience and flexibility of God’s people,” said Rushing, the senior pastor of Decatur First United Methodist Church.

“Even as I acknowledge the ‘feelings of powerlessness, abandonment, and anxiety’ described in the letter, I particularly resonate with the line, ‘leadership cannot be relegated to legislative processes at a quadrennial meeting.’ We are called to be God’s hands and feet in the world, now!”

The Rev. Katie Dawson, a letter signer and delegate from the Iowa Conference, said congregants at Immanuel United Methodist Church in Des Moines have started this year revisiting who they are as United Methodists.

“It has helped us to remember our task to be united in the essentials and to think theologically, to put faith into action, to claim the freedom and power God gives us to resist oppression and exclusion,” said Dawson, the congregation’s lead pastor. “I think all of that has helped to re-center and recommit ourselves to the daily work before us.”

~ The copy of the Letter to the Connection upon the Postponement of General Conference includes the names of the original signers.