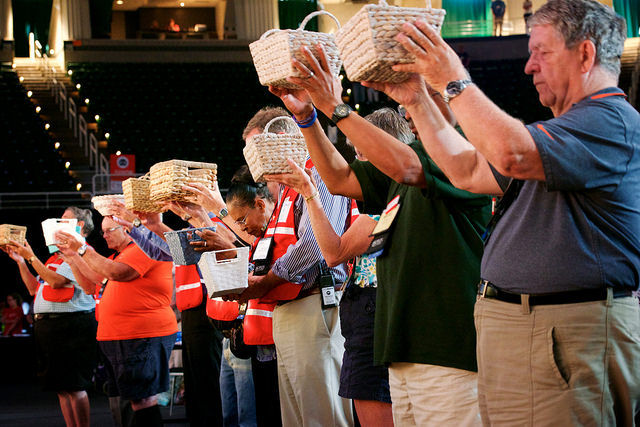 Ushers lift up offering baskets for blessing during a time of praise and thanksgiving at the 2016 Michigan Annual Conference. ~mic photo/Jeremy Africa

Some statistics, percentages and dollar amounts that tell some of the story of the 2016 Michigan Annual Conference.

The grand total for the offerings taken at the 2016 Annual Conference is $80,173.08, distributed as follows:

Newly appointed Area Statistician, Rev. Ron Iris, reported: “We are on an adventure to translate the Gospel in an era that is changing from folks who ‘gather to communicate and teach,’ toward folks who ‘communicate, gather and serve.’ We will catch the tiger by the tail when we move from how much and what we know (our I.Q.) toward how much we participate in practical Christianity (which is our I Do). I celebrate that our 2015 statistics show some of this movement.” Ron reported …

For the 421 active congregations of the Detroit Conference:

For the 392 active congregations of the West Michigan Conference:

The Michigan Area received kudos from Stephen and Gail Quigg, General Board of Global Ministries Mission Advocates for the North Central Jurisdiction. “Congratulations to the Detroit Conference for giving well over $1 million to missions through The Advance in 2015. An even bigger shout-out goes to the West Michigan Conference, the conference with the highest percentage of churches giving to The Advance in the NCJ at 83% and the highest per capita giving in the NCJ at $19.20. Well done, New Michigan Conference, very well done indeed!