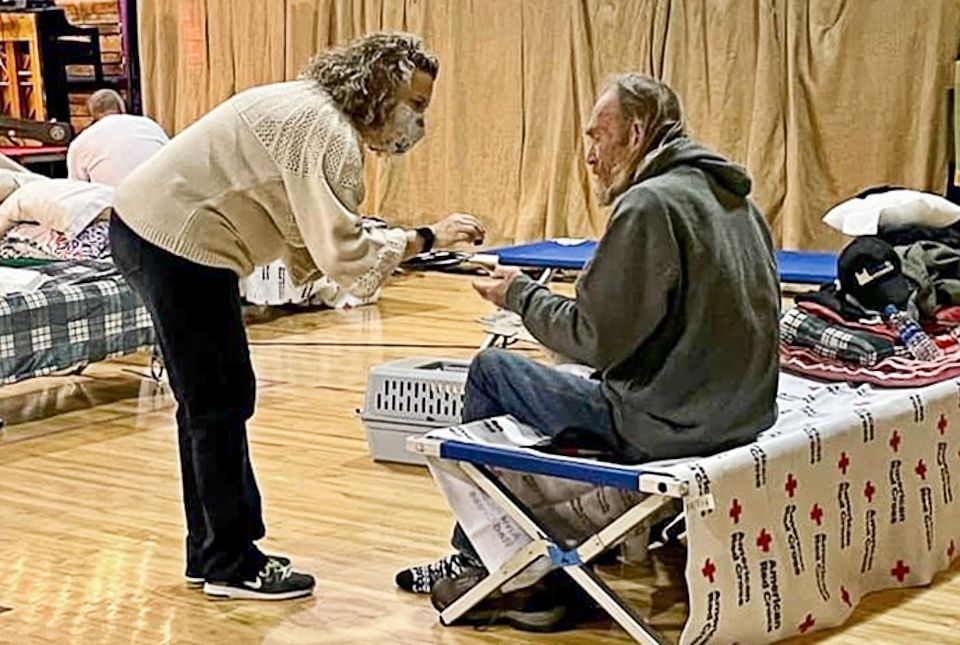 Haley Villines offers Holy Communion to a guest in the church gymnasium serving as a warming shelter at First United Methodist Church in Hot Springs, AR ~ photo by Cindy English

UPDATE FROM UMCOR (Feb. 23, 2021) As the needs in Texas continue, so does support from UMCOR. Emergency funding is supporting relief efforts in The Texas, Central Texas, and North Texas annual conferences. Flood assessments are ongoing and cleaning kits are making their way to communities where burst pipes have caused damage to homes, buildings, and churches. UMCOR-trained local Emergency Response Teams (ERTs) are gearing up and will begin responding later in the week. We remain in prayer with those who weathered and are still weathering, the aftermath of this severe winter storm.

As of Feb. 18, more than a half-million Texas homes still had no power, and many had either low water pressure or no water due to struggling local water systems. Broken pipes and flooding were making some residences uninhabitable.

“We’ve been saying for the last year, during the pandemic, that the church is not the building, yet the building is what people need in terms of having shelter,” said the Rev. Clayton Oliphint, pastor of First United Methodist Church in Richardson, TX.

His church and others — across Texas as well as Arkansas, Oklahoma, and Missouri — offered people a place to warm up, charge devices, and get something to eat.

The Family Life Center at First United Methodist Church in Hot Springs, AR, has been hopping this week.

“It was supposed to be an overnight shelter, but conditions have gotten so bad we’re open 24/7,” said the Rev. Bill Sardin, associate pastor.

The church has focused on helping the homeless, averaging about 50 such people

“The police are driving around, and if they see anybody in the cold, they are bringing them to our shelter,” Sardin said.

Oak Lawn United Methodist Church in Dallas in recent years has been a leader in finding shelter for homeless people when temperatures fall below freezing. The church would typically open its own doors, drawing volunteers from the congregation and other faith groups.

The Rev. Rachel Baughman said the emergency shelter coalition the church is part of decided this year, because of the pandemic, to raise funds to house people in a local hotel. But the hotel faced operational challenges because of the weather, and the number of people in need grew.

So the coalition worked with the city of Dallas to open the downtown Kay Bailey Hutchison Convention Center.

“At this point, we’re up to about 930 people in the convention center, as far as the unsheltered population, which is separate from the part of the center that’s open to the general public,” Baughman said. “We’re been organizing three meals a day, and we have cots for everyone.”

Baughman said rapid tests for COVID-19 are part of the intake process.

“The pandemic adds to everything,” she said.

Baughman praised the North Texas Conference for financial support of her group’s work.

The conference earlier made a $50,000 matching grant that attracted an equal amount of support. In the current emergency, the conference has made another $25,000 grant, said the Rev. Andy Lewis, director of missional outreach.

Lewis praised the collaborative effort to shelter homeless people from the cold as “nothing short of lifesaving.”

Many clergy, including Baughman, have been without power at home for much of the week even as they’ve tried to help others.

The shivering ranks include Texas Conference Bishop Scott Jones, whose episcopal residence in Houston lost electricity early Monday morning and has been part of rolling blackouts.

“It just went out again,” he said during a Feb. 17 phone interview.

Jones said his conference is beginning to get reports of churches and parsonages with broken pipes, due to freezing temperatures.

“We’re still in crisis mode, so we don’t quite know what the damage is,” he said.

Congregation members throughout the Texas Conference are suffering because of no electricity and frozen pipes.

“In Texas, we don’t insulate our homes so well, so pipes bursting is a phenomenon we’ve been experiencing,” Jones said.

The Rev. Paul Escamilla is pastor of Laurel Heights United Methodist Church in San Antonio, and he estimated that at least two-thirds of his congregation is without electricity.

His church opened Feb.17 as a warming station for those in need, including pets.

“You can’t leave pets out of the equation,” said Escamilla.

First United Methodist Church of Wharton, Texas, 50 miles south of Houston, worked with other local churches and the nonprofit Hesed House of Wharton on a strategy for helping in the emergency.

Because of COVID-19-related safety challenges, the decision was to steer clear of opening shelters but identify people in need and get them to more private kinds of warm spaces.

A family of seven, one in a wheelchair and another on oxygen, came to the group’s attention. The family was without electricity and couldn’t find a hotel or motel room.

First United Methodist Church of Wharton has become their temporary home because it has a wheelchair ramp and power for the oxygen machine.

“It’s been a communal effort,” said the Rev. Steven Blackmon, pastor, noting that First Presbyterian of Wharton has been providing food.

The Dallas area, like much of Texas, got double wallops of snow and ice, with temperatures in the single digits on Feb. 16.

The emergency had the Rev. Craig Hill, dean of United Methodist Perkins School of Theology, using his four-wheel-drive truck to pick up two students who had no electricity. He took them to a church shelter, said the Rev. Connie Nelson, the seminary’s executive director of public affairs.

The weather emergency has coincided with Ash Wednesday and kept some churches from having drive-thru events where clergy administer ashes. Other churches had planned to have an in-person Ash Wednesday service — with limited, spaced seating because of the pandemic — but had to go to online only.

Though temperatures rose on Feb. 17, they were still below freezing in many places, including East Texas.

“It’s sleeting right now and coming down pretty hard,” said the Rev. Aaron Laird, associate pastor of Dayspring United Methodist Church in Tyler, Texas, on the morning of Feb. 17. “We have about five inches of standing ice and snow with a layer of sleet coming down on top of it.”

Dayspring opened its doors and took in some area residents, but the church’s septic system froze. The church found safe places for those it had been sheltering and has since arranged for some portable toilets.

The church also made a Facebook appeal for bottled water because a boil-water order is under effect, due to power outage-related problems with the city water system.