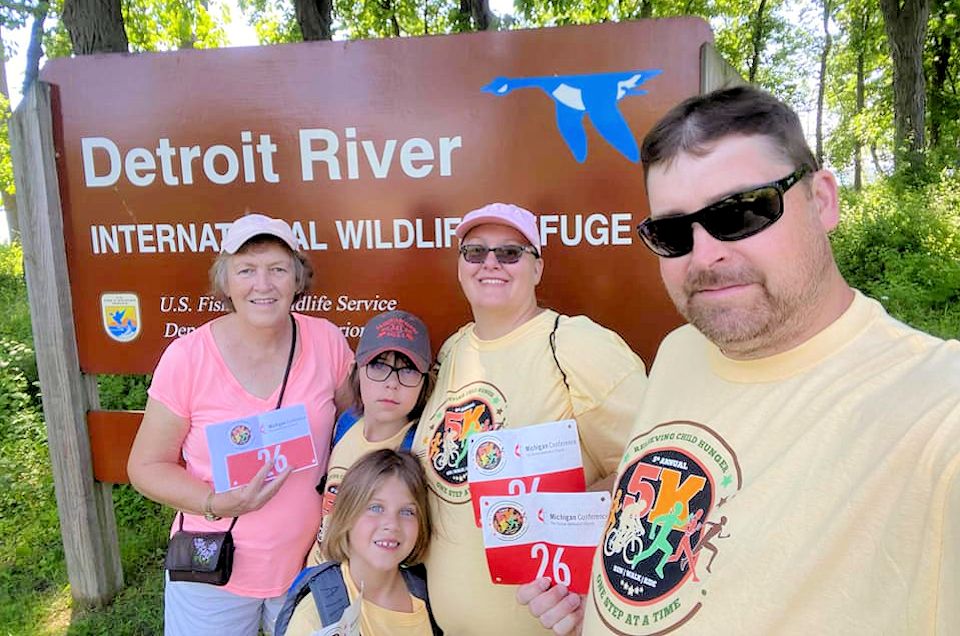 People of all ages participate in the 2021 Michigan Annual Conference 5K. The Bowers/Anderson family completed the 5k walk. The kids were Wyandotte First's youngest walkers. ~ Facebook/#miumc5k

The Michigan Annual Conference 5K has raised over five times more than any previous event. Donations are still coming in to combat child hunger, now just $1,079 short of $50,000.

June 30, 2021 | LANSING – United Methodists’ passionate outpouring of energy and dollars to alleviate child hunger in Michigan continues. The current total raised by the 2021 Virtual 5K Days of Action stands at $48,921. “We are ever-so-close to crossing the $50,000 threshold!” exclaimed conference planner Nancy Arnold. “This will be amazing when it happens!”

In its fifth year, the 5K: Walk, Run, Ride was held at Grand Traverse Resort from 2017-2019. In 2020 the traditional event was impossible as the Annual Conference moved to a virtual experience. Creative minds went to work, and the 5K was to be done virtually … virtually anywhere and anytime participants wished to do it. Last year the cause was disaster recovery in the Great Lakes Bay Region that suffered catastrophic flooding two months before the annual conference was held online. This innovative approach in 2020 netted contributions of over $9,000 raised by 200 people in six states.

Registrations began to pour in from individuals, groups, and congregations. Race bibs were issued, all marked with the number 26, the percentage of Michigan’s children suffering hunger. All registrants were encouraged to do the 5K during the Annual Conference, June 3-6. However, before conference even began, $23,527 had been raised. Troy Korean United Methodist Church was among the early responders. An event held on May 23 raised $12,032 despite the rain that hung over Troy that day.

In the three weeks since the 2021 Michigan Annual Conference adjourned, donations have continued. Here is the break down to date:

The good news does not stop there. Nancy Arnold states, “There is much to be celebrated. While much has come in to relieve child hunger, the funds for the traditional Annual Conference Offerings haven’t diminished.” It’s too early to claim a total, but the current amount is $23,370 for Haiti and $23,370 for Liberia. These funds for Michigan Conference’s Covenant Partners are designated for Haitian Assets for Peace International and the Bishop Judith Craig Children’s Village.

An additional $1,340 was contributed to the Ministerial Education Fund. Also of note, the United Methodist Foundation of Michigan hosted the reception following the Service of Recognition, Commissioning, and Ordination held on June 8 at Troy Historic Village. Generosity abounds!

“We only need $1,079 to raise the 5K total to $50,000,” Arnold remarks. “So clean out the garage and return the pop cans, take a noisy offering at church or VBS. Ask kids how to raise money to help kids in their community.”

Eighteen more pet bandanas are now available. Interested dogs and cats can have their humans contact Sarah Vollmer (svollmer@michiganumc.org). Sarah will mail a bandana for a minimum $10 donation, which feeds a child for a weekend through a weekend food supply program.

Paypal donations may be made here. Checks may be mailed to the Treasurer’s Office,1161 East Clark Road Suite 212, DeWitt, MI 48820. Please write “child hunger relief” in the memo section.

The goal is to contribute $5,000 to each of ten organizations in Michigan that support hungry children and families in all counties in the state. Learn more about these organizations and the children they serve.

The 2021 Michigan Annual Conference Virtual 5K may be over. But the need will be ongoing. Visit the Child Hunger Resource Page to learn of additional ways individuals and churches can address the needs of the young people in neighborhoods all around us.