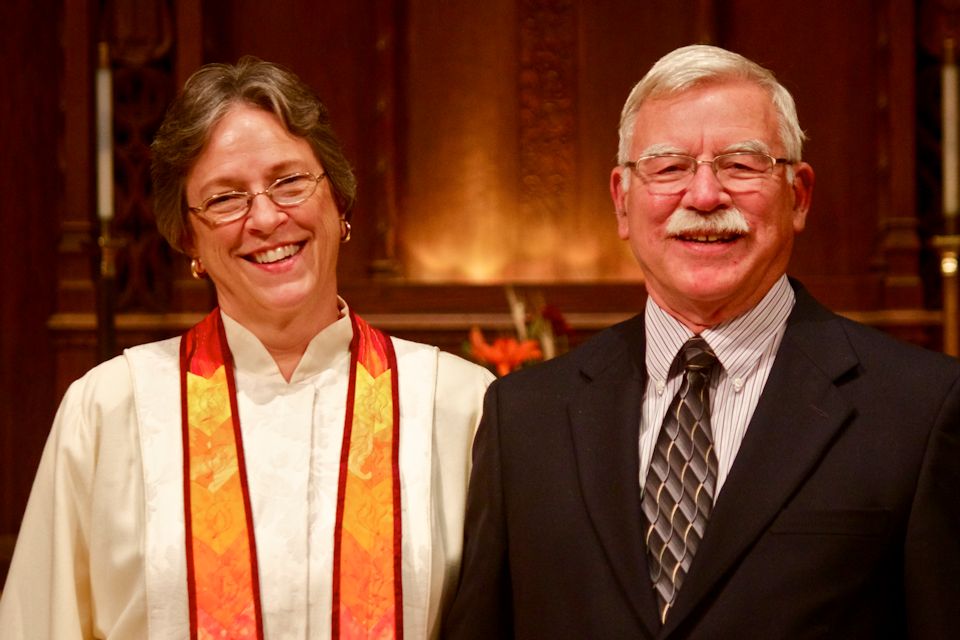 D. Bradley Kiesey died surrounded by family on January 27, 2021.  A memorial service will be live-streamed from Iowa City on February 17, 10 am.

Brad Kiesey was an Iowa farm boy who grew up in Washington on a forty-acre farm. He always loved music and met his wife Deb while he was first practicing law in Mason City. I didn’t meet Brad until Deb was elected a bishop in The United Methodist Church. I remember voting for her at the North Central Jurisdictional Conference in 2004.

Brad and Deb and my husband Gary and I became better acquainted in 2008 when the North Central Jurisdictional Conference met in Grand Rapids, MI, and we had lunch together. I connected right away with Brad because he was a wonderful musician who was also committed to being a supportive spouse to Deb.

When Bishop Deb was assigned to West Michigan and Detroit Annual conferences in 2012, I was delighted to have her as our episcopal leader. Although Brad was still practicing law in Iowa, Gary and I would occasionally connect with both Brad and Bishop Deb. I loved hearing about all of Brad’s activities, especially his love for history and antique cars.

Brad’s deep faith was evidenced by his willingness to always be of assistance to others. I am deeply grateful for the goodness of Brad’s life, the love that he had for his children and grandchildren, and the many lives that were transformed by his grace and kindness.  All who knew Brad will miss him greatly.

More about Brad’s life from his obituary …

On Wednesday, January 27, Dennis Bradley (Brad) Kiesey passed away surrounded by family and supported by the thoughts and prayers of friends, family, and colleagues across the nation and the world.

Brad was born to Theodore and Ernestine (Murdock) Kiesey on October 19, 1945, in Washington County, IA. He grew up on their 40-acre farm outside the small town of West Chester. Graduating from Mid-Prairie High School in 1964, he was an avid musician, playing saxophone in dance bands across the county and singing in the high school choir. Music would remain a passion of his throughout his life.

Brad attended the University of Iowa, graduating in 1968, Phi Beta Kappa, with a degree in Journalism, and from the University of Iowa College of Law in 1971. Brad first practiced law in Mason City, IA, where he met his wife, Deborah, before moving back to Washington County to open his own practice and to serve the community where he was raised. He practiced in Washington for 45 years.

Married in 1975, Deb and Brad welcomed two sons, Joel Wesley (1979) and Aaron Michael (1981). Deb’s profession as a United Methodist clergy required frequent relocations in Iowa and beyond. Throughout that time, he continued to practice law in the community he loved while actively remaining a supportive husband and father to Joel and Aaron and a doting grandfather to Clara and Jacob.

He will be remembered for his generosity and decades-long service in the Washington Kiwanis AMers, Old Capitol Barbershop Chorus, United Methodist Men, Southeast Iowa Antique Car Club, church choirs, and by all who were privileged to know and love him.

Deeply compassionate and steadfast in his faith, Brad shared himself and his gifts with all who were in need. It was said of him that he “walked the talk” of his faith. Clients and colleagues alike respected his integrity and his thoughtful intelligence. Brad had a wide range of interests, a remarkable memory, and an extensive knowledge of and interest in history. His energetic, outgoing spirit made him a friend of anyone he met. Brad was helpful and genuinely interested in others and was faithful to the very end. He will be sincerely missed by all who knew him.

He was preceded in death by his parents, brother, Doug, and brothers in law, Mark Lieder, Steve Smith, and Denny Sheridan.

Because of COVID-19 restrictions, a service is planned for family only on February 17, 2021, at 10:00 a.m. at First United Methodist Church, Iowa City. However, the service will be live-streamed so the many family members, friends, and colleagues across the country and the world can celebrate his life. The Zoom link may be found under the Tribute Wall on Brad’s obituary page at www.lensingfuneral.com. Expressions of condolence may also be shared on that page.