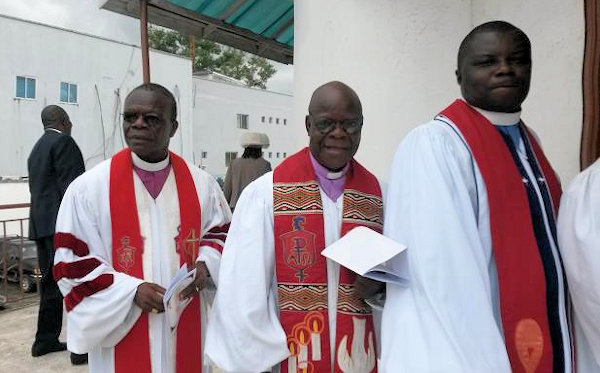 Bishop John Innis has retired and Bishop Arthur Kulah is standing in as Liberia’s episcopal Leader through 2016.

Retired Bishop Arthur Kulah, who was bishop in Liberia for 20 years, has been called out of retirement to serve the Liberia Episcopal Area of The United Methodist Church as its interim bishop until 2017.

Bishop John Innis, who led the conference since his election in 2000, retired as of Sept. 1. His successor will be elected by the West Africa Central Conference, which meets Dec. 13-16.

Kulah served the Liberia Conference as bishop until his retirement in 2000. His return marks the second time he has left retirement to serve as interim bishop. He served in the Nigeria Episcopal Area after the death of Bishop Kefas Kane Mavula in 2007 until Bishop John Yohanna was elected in 2012.

At the ceremony marking the turning over of power, Innis said he was leaving the church in the hands of someone who was well-seasoned in its workings.

“Bishop Kulah is no stranger to the Liberia society and the church, he will lead us peacefully through the transition,” Innis said. He praised Kulah for the cordial relationship that existed between the two of them during his 16 years of service to the church.

“Bishop Kulah is no stranger to the Liberia society and the church, he will lead us peacefully through the transition.” ~Bishop John Innis

“He handed this mantle of power to me; I am now handing it over to him to ensure that we concluded the 16 years peacefully,” he said.

Innis is credited with raising the educational standard of United Methodist pastors in Liberia. During his 16-year tenure, more than 10 pastors received Doctor of Ministry degrees from various universities in the U.S., while more than 20 pastors now hold master’s degrees in various fields of studies. And the number of United Methodist schools has increased in rural areas since Innis initiated partnership with The United Methodist Church in Norway.

Innis also involved the church in corporate ventures that will provide financial income. One example is the Liberia United Methodist Empowerment Foundation, intended to fund the retirement of Liberian clergy and provide educational support for the church.

“If you have any issues with the conference and its leadership, come and let us discuss them,” he said.

He also urged members to affirm each other in public and resolve their differences privately.

“We need to protect the image of UMC Liberia so that the incoming bishop will inherit a peaceful church,” he said, adding that a successful transition in December 2016 by the church will serve as an example for the 2017 national elections in Liberia. “The entire country is watching The United Methodist Church in Liberia,” Kulah said.

The Rev. George Wilson called on United Methodists throughout Liberia to lift each other up as the conference prepares for the transition to new leadership. Using the “Good Samaritan” story, Wilson challenged members to care for the church and support the leadership of the church in these critical months.

“Do not pass on the other side, but lift up your falling brothers and sisters regardless of the differences,” Wilson said.