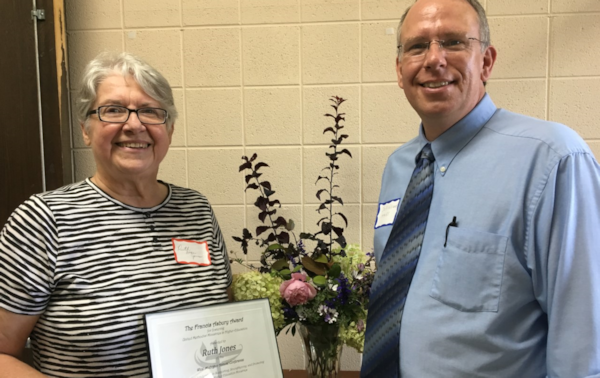 The past and present was celebrated at the 50th anniversary of Wesley at CMU.

MT PLEASANT, MI — On Saturday, Sept. 16, the Wesley Foundation at Central Michigan University celebrated the 50th Anniversary of their building. Fifty years ago in 1967, the Wesley Foundation at CMU built a brand new facility; a building where friendships would begin, memories would be made, and community would continue to be built. Now, 50 years later, over 60 alumni, supporters, and other guests came together to celebrate the place that brought so many people together through community and Christ.

The eventful night for Wesley@CMU began with refreshments and reminiscing on the memories that had been made throughout the building over the last half century. Walls were filled with photos on display. The guests also participated in worship together, where past and present band members shared the gift of music, and current Wesley Director Charlie Farnum provided the sermon.

The event also celebrated the ministry of the Rev. Richard and Carol Youells. Rev. Youells was the director when the building was erected and the couple’s presence at the golden anniversary was special.

On top of the already eventful day, the Wesley Foundation at CMU recognized a very important member of their Wesley Community. During the 50th celebration, the Francis Ashbury Award was presented to Ruth Jones, who was nominated by the Wesley@CMU Board of Directors. The denomination’s General Board of Higher Education and Ministry (GBHEM) confers the award each year to worthy advocates of higher education. Jones was one of 15 persons to receive the honor in 2017.

“Every year, we honor those who have made a significant contribution to developing the churches’ ministries in higher education. These are people who have positively impacted higher education at the local, district or annual conference level of the church,” Reverend Matthew Charlton, Ph.D., assistant general secretary, and Collegiate Ministry at GBHEM said.

Jones was a much deserved recipient of the Francis Ashbury Award, and her life and hospitable qualities were celebrated during the award ceremony. Jones has done so much throughout the past decades, including being directly involved at Wesley@CMU from 1978-1991, the duration of time that her husband, the Rev. Thomas Jones was the director. She even offered her home to students through meals and lodging. Jones welcomed these students with open arms and often looked at these students as a part of her own family.

“[Jones] is a long time advocate of campus ministry in general and Wesley@CMU in particular,” Chair of West Michigan’s Higher Education and Campus Ministry Jeff Williams said. “She understands the crucial nature of supporting campus ministry as a system from the campus through the Annual Conference and denomination. Her enduring spirit and support inspire us to continue our advocacy with the [Michigan] Annual Conference.”

Jones and her family also gave a major financial gift that supported in building the current Wesley@CMU Residence, where a room was named in honor of Rev. Tom Jones.

The 50th Anniversary of the Building, as well as Ruth Jones receiving the Francis Ashbury Award filled the space with joy, laughter, and wonderful memories. The attendees finished out the event with a tour of the student residence, as well as a formal service, titled “Celebrating the Past, Living in the Present, Supporting the Future.” During this program, the attendees were able to learn a bit of the Wesley@CMU history, which included statements from Rev. Youells, as well as reports from current students about what is happening at Wesley today.

“A strong theme of Wesley was and is authenticity,” Deputy Director of Wesley@CMU Kendall Farnum said. “We strive to build community and belonging for all who come in as we share the love of God for all his people.”