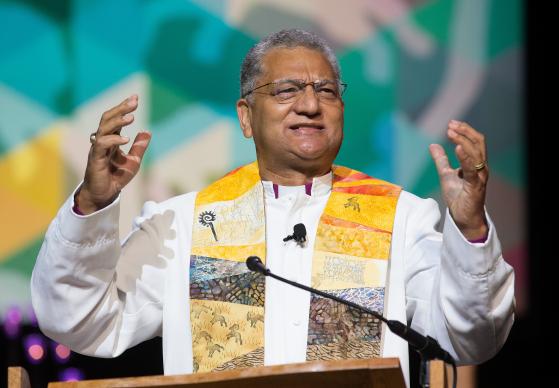 Bishop Ivan Abrahams calls the church to leave empire and go to the margins.

The concept of “empire” has become a reality of the 21st century, says Bishop Ivan M. Abrahams, top executive of the World Methodist Council, and Christians need to be wary of pledging an allegiance to something other than Jesus.

In his May 17 sermon to General Conference 2016 on Matthew 18:10-14, Abrahams, a member of the Methodist Church of Southern Africa, used the sub-theme, “Go in the name of Jesus of Palestine rather than Jesus of Constantine.” He invited the conference to talk about what type of church we want to be: the church of “the least of these” or the church of the status quo.

The people of Palestine always had a quest to be free, he noted. “This yearning for freedom spawned many Messianic movements, and it is against this background that we need to understand that Jesus came to start a new community of sisters and brothers in which there was ‘egalitarian’ relationships, a sign of the kingdom of God.”

Just as Jesus stood against Caesar, the early Christian communities, mostly drawn from lower economic classes “disavowed Roman domination and tyranny,” Abrahams said. “They challenged the lordship of Caesar, and for this reason, they were severely persecuted.”

But in 313 A.D., the Emperor Constantine issued the Edict of Milan, which sought to win the “hearts and minds” of Christians and bring about social cohesion, making Christianity a justification for holy wars. Twelve years later, Constantine institutionalized the faith as a state religion. “Sadly, the church seduced by the politically powerful, endorsed the status quo,” Abrahams said.

Since that time, he declared, history has been littered with examples of the church building its own empires. “To go in the name of Jesus of Constantine is to live comfortably with power, prestige and profit failing to hear the voices of the ‘least of these,’ Abrahams said, placing profit before people and preaching Christ without the cross.