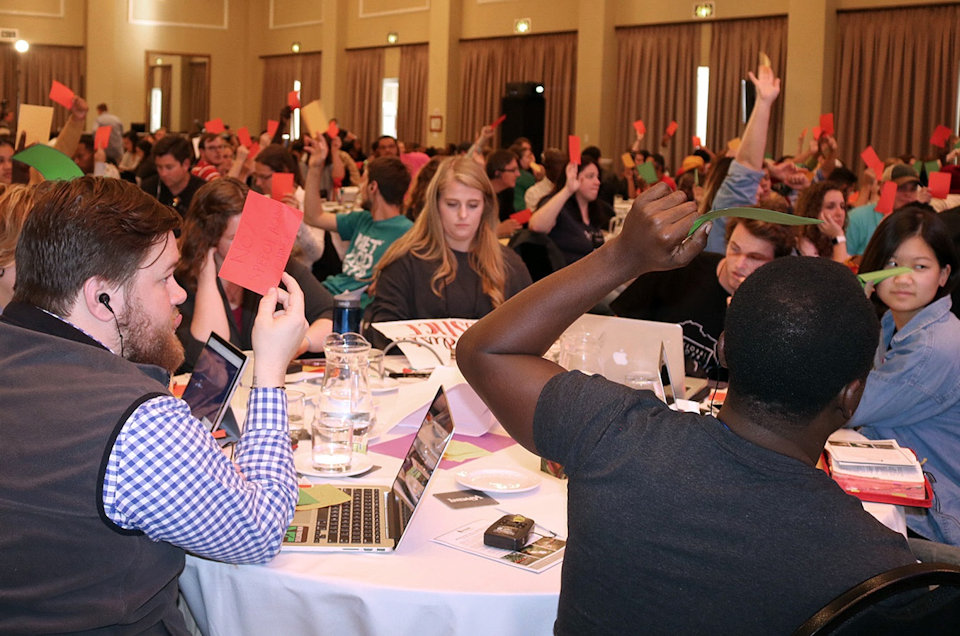 Delegates to the Global Young People’s Convocation in Johannesburg, South Africa, vote on legislation that will be presented by youth and young adults at the United Methodist General Conference in 2020. ~ umns photo/ Eveline Chikwanah

Delegates to the Global Young People’s Convocation developed legislation that will be submitted as petitions to the 2020 General Conference.

Delegates to the Global Young People’s Convocation developed legislation that will be submitted as petitions to the 2020 General Conference. Issues of interest to the young United Methodists included migration, nationalism, sexism and rejection of child marriages.

In some cases, the delegates felt the wording in the Book of Discipline and the Book of Resolutions had to be amended in order to reflect their perspectives.

On migrants, the young people agreed, “The Book of Discipline does not reflect all human beings or draw attention to the diverse reasons why individuals leave their countries of origin.”

The petition to General Conference 2020 will be to amend Paragraph 162 H to read: “Rights of Immigrants, Migrants, Asylum Seekers, Refugees, Undocumented Persons and Internally Displaced Persons.” This would embrace all people not living in their home countries due to different situations.

Delegates also agreed it is important to include in the denomination’s Social Principles that early marriages are not accepted in the eyes of The United Methodist Church.

The amendment to Paragraph 161 C will include the statement: “We reject the practice of child marriages, in terms of arranged marriages with minors, as it violates children’s rights.”

A Declaration on Sexism, with emphasis that every individual is of sacred worth, is a new resolution to be presented to the 2020 legislative assembly. It affirms that every person is loved by God and denounces sexual harassment and gender-based discrimination. The legislation advocates for equal pay for men and women doing the same work.

Isabella (Izzy) Nowak, a young woman from Pinconning Michigan was among those voting in this forum. Izzy was a delegate for the North Central Jurisdiction of The United Methodist Church. She said of the legislative work:  “We had very different cultural perspectives but, for the most part, we agreed on most things,” she added. “I was surprised how similar our thought processes were on legislation and political justice movements.”

Ciere Turner, Detroit: Conant Avenue United Methodist Church, was also at GYPC 2018. Ciere observed,  “I was not voting but saw that there are some topics very headstrong in the church right now.” His role was to “see how the people were thinking and what direction they were pushing.”

Moselle Jules, of the United States, was among the more than 330 young people from 40 countries who participated in the convocation July 18-22.

“It was very different from other conferences we have at my church,” she said. “I really liked it and want to come back in the next four years.”

As a non-voting delegate, she said she just listened the majority of the time during the legislative forum. She found the proceedings easy to follow, and she particularly enjoyed the workshops where she joined in discussing environmental concerns.

“We talked about the different weather conditions happening in the countries represented in our group. It was interesting to learn that the same things are happening across the world,” Jules said.

“I liked the leadership skills we were able to build during the workshops that were provided,” said John, from the U.S. “The legislative forum felt a little rushed at times, but we had very good conversations.”

Claude Katut from the Democratic Republic of Congo, attended the convocation for the first time.

“I was impressed with the way the convocation was organized. It gave me an opportunity to meet other young people from all over the world and to be united in accordance with the theme,” he said.

“I appreciated the way the legislative forum was conducted, especially the way we were guided when we reached the point of voting.”

Because other United Methodists helped him understand church procedures, he was able to participate in the legislative process.

“The legislative forum was so good,” he said. “I liked it.”